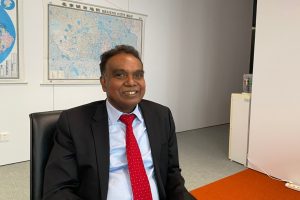 BRICS countries headquartered in Shanghai Nav Vikas Bank (NDB) former bureaucrat Dr. DJ Pandian To Director General of its Regional Office at Gujarat International Finance Tec City (GIFT City), India has been appointed. Pandian was earlier based in Beijing. Asian Infrastructure Investment Bank (AIIB) was the Vice President and Chief Investment Officer in the company, in which India is the largest shareholder after China.

During his tenure at AIIB, he was instrumental in securing USD 6.7 billion in funding for 28 projects in India, which has been termed as the highest project finance awarded by the Bank. A retired IAS officer, Pandian had also served as the Chief Secretary of Gujarat.

The announcement of Pandian’s appointment comes as China, which is the chair of this year’s BRICS, is set to host the summit of the five-member bloc via video link on June 23-24, attended by Prime Minister Narendra Modi. are going to participate.

You must know about 'Khelo India Youth Games 2022'

Stocks to Buy: These 5 Shares Will Fill Your Pockets! Brokerage bets, you can get up to 76% returns. Zee Business