Kareena Kapoor Asks, “Mr Khan Is That You?” As She Shares New Pic From Her London Diaries

Kareena kapoor, who is currently holidaying in London with her family – husband Saif Ali Khan and two sons, Taimur and Jeh, shared a new post on her Instagram handle. The actress shared a picture of Saif Ali Khan roaming the streets of London. In the image, we can see her performing her husband’s duties, carrying a bag on her shoulder and in her hand. The actor looks as dashing as ever in a blue t-shirt teamed with jeans. She completed her look with white sneakers and sunglasses. Sharing the picture, Kareena captioned it as, “Mr Khan is that you?” Followed with laughter and heart emoticons. 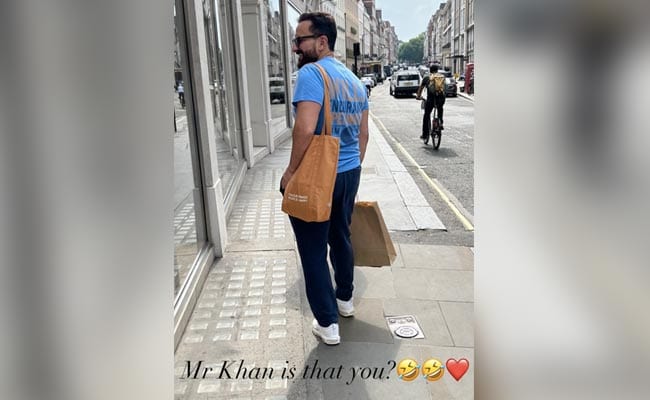 few days back, Kareena kapoor Sharing a picture on her Instagram handle, informed her fans that she is holidaying in London. She shared a picture of herself sipping coffee and captioned it, “Wait two years for you baby pret #sipping my coffee coffee lover”. See the post below:

Meanwhile, on the work front, Kareena Kapoor recently wrapped up shooting for Sujoy Ghosh’s next based on a Japanese novel, Suspicious X. devotion to, The film also stars Jaideep Ahlawat and Vijay Varma.

Also, Kareena Kapoor is waiting for the release of her much-awaited film. Lal Singh Chaddha, co-starring Aamir Khan. The film is slated to hit the theaters on August 11.